skip to main | skip to sidebar

Stuff that Weighs More than Me: GIANT CARROT! 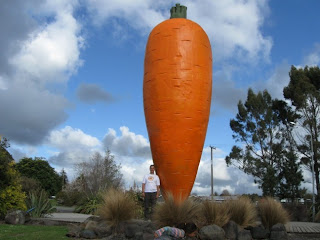 Okay, since I was talking about motivation (and the carrot and the stick) in my Fat Chick Sings Blog, I thought I'd research the world's largest carrot.  Unfortunately the world's largest real carrot weighs only about 8 pounds.  And while 8 pounds is REALLY big for a carrot, it decidedly weighs less than me.  However, in my research I came across this giant carrot sculpture in Ohakune, NZ.  It recently celebrated it's 20th anniversary in the town.  The carrot although controversial when installed (some of the townspeople felt it was too, um, phallic) is now beloved by the town which now hosts an annual carrot festival.  Precise weight statistics are not available, but this thing is over 30 feet tall!  So I did some research regarding the weight of resin fiberglass sculptures based on square footage and thickness and blah, blah, blah. and after detailed calculations I came up with, um LOTS!  It's just a guess, but I'm going with it.

So often we feel like this biggest and heaviest thing around, right? But as this blog proves, it simply isn't true. I've taken a long and look at some really heavy creatures and things in this world, and I've got to tell you, I feel comforted. It's my deepest wish that we can all recognize that we're not the heaviest objects in the universe. And I dearly hope that spending a little time comparing our size to that of a giant redwood tree causes spend a little less time comparing ourselves with one another. After careful study I've determined that I deserve the space I occupy in the universe. After all, there are thousands of other creatures, plants and things in and around this world that that weigh more than me.

The Fat Chick
Hi, my name is Jeanette and I'm The Fat Chick. Not just any chick mind you, THE Fat Chick. I am a fat and healthy exercise instructor and Hollywood producer. Believe me, if I can learn to love my looks and my body in THIS town, I can do it anywhere. And YOU can too!