skip to main | skip to sidebar

Stuff That Weighs More than Me: The World's Biggest Vuvuzela

For a little piece of plastic, these things make a very, VERY big noise.  Even for the little plastic version, sound pressure can reach as high as 120 decibels at 1 meter from the horn opening.  One might think that would be enough noise, but OH, NO. Not when crazed soccer fans and the companies who wish to market to them get involved.

So for the 2010 World Cup Hyundai set out to create the World's Largest Vuvuzela, which is played at the beginning of each match.  There's no question that this thing is big, at over 114 feet long.  It's hard to say exactly how much it weighs, but given it's size and the fact that it needs it's own freeway to rest on, I think it's safe to say it weighs more than me.  Check out the video:

Aside from the very large Hyundai Vuvuzela (which is some smart marketing by the way), there's also the matter of the world's largest vuvuzela concert.  A total of 12,511 people all managed to blow vuvuzelas simultaneously for a brand-new Guinness World Records-approved achievement.  So if we calculate a minimum of 100 lbs per person including the plastic vuvuzela, we're looking at over 62 short tons of fun here!  So whether we're talking about the Hyundai vuvuzela or the world's biggest vuvuzela concert, we're most definitely talking about something that weighs more than me.

Want to hear about another great vuvuzela concert?  Click HERE to check out some classical vuvuzela moments!
Posted by The Fat Chick at 10:44 AM No comments:

Stuff that Weighs More than Me: Solid Gold 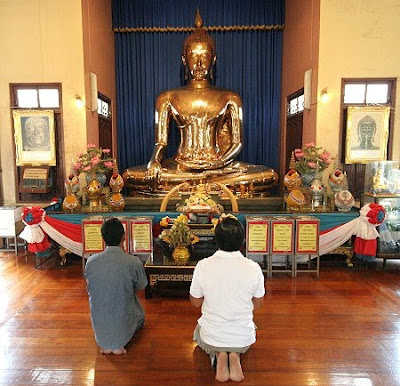 Temple of the Golden Buddha or Wat Traimit houses a solid gold Buddha image.  At one point, towards the end of the 18th century, the statue was covered with stucco and moved in order to hide it from the invading Burmese.  Later the temple that housed the statue was closed down, and the statue was moved to Wat Traimit in Chinatown in Bangkok.  The abbot of the temple tried to get the statue transmitted, but because of it's large size and plain looks nobody wanted it.  As they moved the statue, it got caught in the rain and dropped, causing the stucco to break away and the solid gold statue underneath to be revealed.  Needless to say, the statue still resides at Wat Traimit.


Conclusion: More than my weight in gold by quite a stretch.


Getting a craving for some Thai food?  Check out this awesome recipe for Thai Green Curry Fish HERE on Fat Chick Sings!
Posted by The Fat Chick at 10:37 PM No comments: 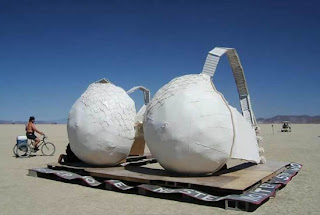 This is a bra sculpture, apparently seen at Burning Man.  I actually have very little information about it other than the obvious--it's big.  I mean REALLY big.  This thing gives new meaning to the slang over the shoulder boulder holders.

I'm guessing the material was wire and fiberglass.  But even with those lightweight materials, this thing has to be heavy.  I'd guess a height of about 15 feet and a circumference of about 60 feet.   Minimally I"m guessing 500 lbs for this sculpture.  But one thing I do know, the seriously huge knockers that would fit in this getup, would weigh more than me.

Wondering why I'm obsessed with underwear?  Check out the article on The Fat Chick Sings.
Posted by The Fat Chick at 5:26 PM No comments:

So often we feel like this biggest and heaviest thing around, right? But as this blog proves, it simply isn't true. I've taken a long and look at some really heavy creatures and things in this world, and I've got to tell you, I feel comforted. It's my deepest wish that we can all recognize that we're not the heaviest objects in the universe. And I dearly hope that spending a little time comparing our size to that of a giant redwood tree causes spend a little less time comparing ourselves with one another. After careful study I've determined that I deserve the space I occupy in the universe. After all, there are thousands of other creatures, plants and things in and around this world that that weigh more than me.

The Fat Chick
Hi, my name is Jeanette and I'm The Fat Chick. Not just any chick mind you, THE Fat Chick. I am a fat and healthy exercise instructor and Hollywood producer. Believe me, if I can learn to love my looks and my body in THIS town, I can do it anywhere. And YOU can too!